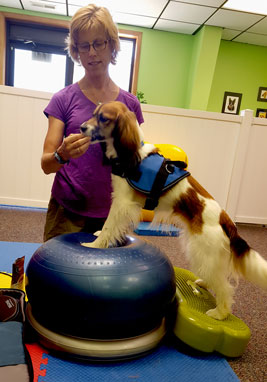 Jean graduated from the University of South Dakota in 1999 with a Master’s degree in Occupational Therapy. During her time at USD, Jean looked for ways to combine the human and animal therapy worlds and completed her research project on Animal Assisted Therapy (AAT), specifically using dogs within therapy treatments of humans.

Since then, Jean has brought her dogs along to the various work settings and used them within therapy treatments and also as stress relief for staff. Some of the settings they have worked in include rehab centers, skilled nursing facilities, facilities for people who have experienced traumatic brain injuries, and assisted living facilities.

Dogs have been a part of Jean’s life for as long as she can remember so it was very natural to bring them with her as she started her OT career. Not only do the dogs work with Jean, they also go for runs with her and compete in agility. Due to the partnership she has had with her dogs, she was very interested in finding was to help them therapeutically to keep them sound for work and also athletically. When one of her dogs, Echo, was diagnosed with lumbo-sacral stenosis, Jean felt the need to learn canine rehab in order to better help Echo.

In July 2011, Jean attended the University of Tennessee and became a Certified Canine Rehabilitation Practitioner (CCRP) and has been treating dogs ever since. Jean now feels she has the best of both worlds professionally as she gets to treat dogs & humans.

Jean is proud to be the first Occupational Therapist to receive an Animal Therapist license in Nebraska. 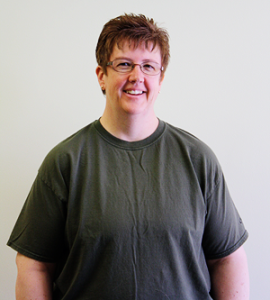 Kim graduated from Michigan State University College of Veterinary Medicine in 1991. She put her new degree to good use at a small animal practice in Yankton, South Dakota until 1997, when she relocated to Sioux City, IA.

She worked for another small animal practice in Sioux City for over 12 years, until leaving in 2011.

Kim’s love of animals carries over into her personal life as well. She has three dogs of her own: a 12-year-old Yorkie named Levi, and two corgis, Lainey, 7, and Viva, 2.

Kim has been running corgis in agility since 2008, and went to the ACK national agility championships with Lainey.

This hobby made her realize how important it was to keep performance dogs sound and injury free, which is what sparked her interest in helping Jean provide canine physical therapy at Four Paws.

Kim offers acupuncture and massage at Four Paws on Tuesdays and Thursdays.